Investigate Australia's role in WWII with these resources 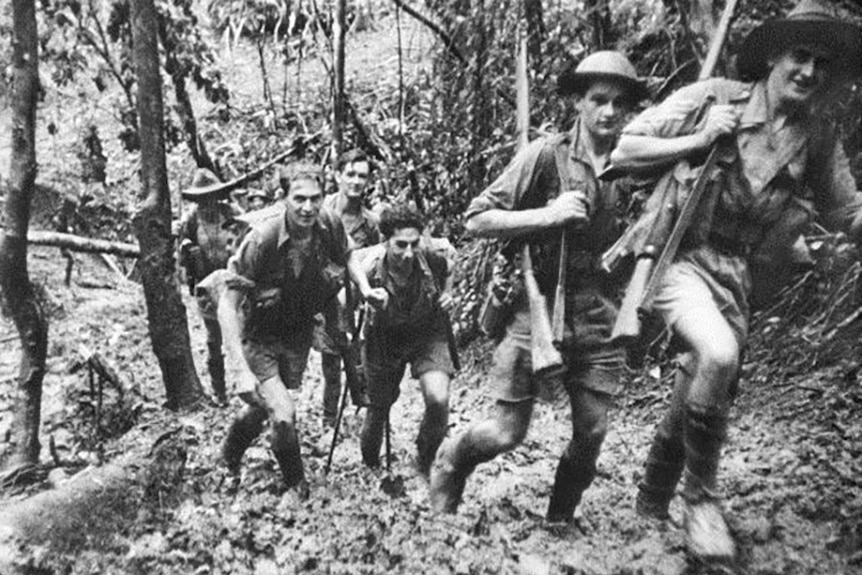 The Kokoda Track campaign or Kokoda Trail campaign was part of the Pacific War of World War II. The campaign consisted of a series of battles fought between July and November 1942 in what was then the Australian Territory of Papua. It was primarily a land battle, between the Japanese South Seas Detachment under Major General Tomitarō Horii and Australian and Papuan land forces under command of New Guinea Force. The Japanese objective was to seize Port Moresby by an overland advance from the north coast, following the Kokoda Track over the mountains of the Owen Stanley Range, as part of a strategy to isolate Australia from the United States. Read through the resources below to learn more.

Why is the Kokoda Track significant? (ANZAC Portal, n.d.)

In 1942 the Territories of Papua and New Guinea were as much a part of Australia as the Northern Territory. Papua had legally become part of Australia in 1905 with the passing of the Papua Act that transferred ownership of British Papua to Australia while New Guinea had become a League of Nations' Mandate administered by Australia after the First World War. It is then quite true to say that Australian soil was invaded by Japan in 1942.

The Kokoda track is also significant in a symbolic sense. When Australians remember the First World War they think of the landing at Gallipoli. When they think of the Second World War the word 'Kokoda' looms large. While neither of these events was necessarily the greatest of our contributions to the World Wars, both have captured the Australian imagination.

This article from the Australian War Memorial gives a very brief overview of the Kokoda Track Campaign and the importance of the campaign to the Allied war effort.

Why was the Kokoda Campaign significant? (History Hit, 2020, November 7)

Singapore had fallen. Darwin had been bombed. Indonesia had been taken. Australia was under direct attack, and many feared a Japanese invasion. After being at the forefront of the British Empire’s struggle against Nazi Germany for the previous two years, in 1942 it was having to defend its own territory against Japanese attack. This article looks at the significance of the Kokoda Campaign and why it is so central to Australia's remembrance of World War II.

This website gives a detailed timeline of the different battles and events of the Kokoda Track Campaign.

In July 1942, Japanese forces landed on the northern coast of Papua. Their objective was to make their way overland along the Kokoda track and capture Port Moresby on the southern coast. This would give them control of Papua, and a base from which to attack the Australian mainland and shipping in the Pacific.

The Kokoda track cuts through 96 kilometres of dense jungle and over mountains. Much of it can only be travelled on foot, which meant that all supplies and heavy equipment had to be carried. The Kokoda action lasted until November 1942 and is remembered as one of the most difficult operations by Australian troops in World War II. Read through this website to learn more.

The Kokoda Track marks the course of one of the most important battles for Australians in the Second World War. Between 21 July and 16 November 1942, the Australian Army halted the furthermost southward advance by Japanese forces in Papua New Guinea and then pushed the enemy back across the mountains.  Read through this website to learn more.

What’s remarkable about Damien Parer’s Kokoda footage is that there is no actual combat, and the Japanese presence is felt most keenly through its absence.

The capture of Port Moresby remained a Japanese priority as it would enable them to bomb vital Allied bases in northern Australia. A two-pronged attack on the capital was initiated, firstly with an attempt to capture Milne Bay to the east of the city from where they would launch an amphibious assault, then a landing at Buna and Gona on the north side of the island from where they would cross the rugged Owen Stanley Ranges to the capital. The Kokoda Trail, a rough foot trail that traversed the mountains, was the only viable route from the north to the south of the island. Read through this website to learn more.

The 96-kilometre Kokoda track takes about 50 hours walking time. That is about two kilometres per hour. Read through this website to learn more about the topography of the Kokoda Track.

Papuans living in the villages along the Kokoda Track prior to the Second World War (1939 - 45) lived a wholly traditional existence. Their only previous contact with the modern world had come with the occasional visits of Australian Government patrol officers. They knew nothing of the war or the nature of modern warfare, until it came crashing into their villages in July 1942. The Papuans aided the Allies, providing courageous and invaluable assistance. Read through this website to learn more.

The people who lived in the villages along the Kokoda Track knew little about the war until it came to them. They had lived a traditional life, with only occasional contact with Australian patrol officers. Then Australian troops began moving over the tracks, some occupying huts and trampling over gardens. As the fighting came closer, most villagers 'went bush' to camps away from the main tracks. Many of the villagers also worked in support of the battle, carrying supplies forward for the troops. Teams carried seriously wounded and sick Australian soldiers all the way back to Owers' Corner. Their compassion and care of the casualties earned them admiration and respect from the Australians, who dubbed these men their 'fuzzy wuzzy angels'. Read through this article to learn more.

The “Fuzzy Wuzzy Angels”: looking beyond the myth (Emma Rogerson, 2012)

Australian soldiers and local New Guinean troops gather in a village just prior to launching an attack against Japanese forces in August 1942. Parer took this photo at the same time he was filming footage for his newsreel Kokoda Front Line! 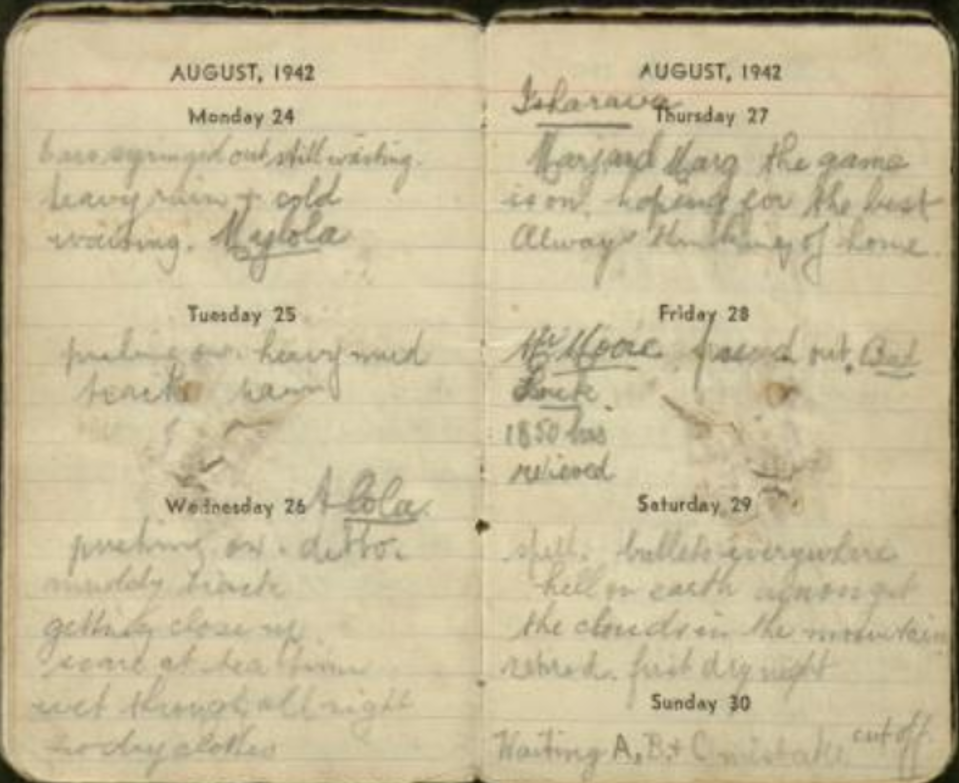 Private Clarke's diary shows the damage done by the jungle damp.  Because of the high altitude, cold nights were a problem for the troops, as were mud, rain and hunger. 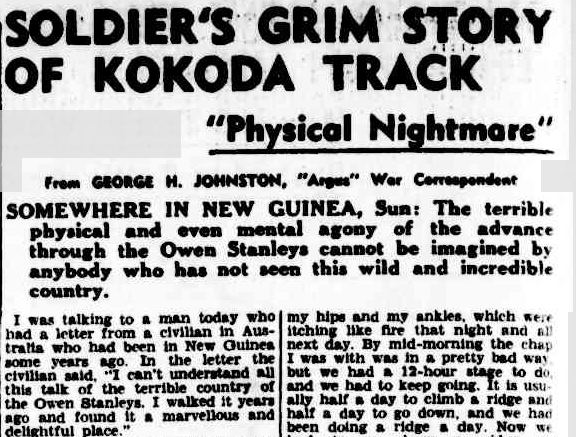 This newspaper article from 1942 includes a firsthand account of the Kokoda Trail. 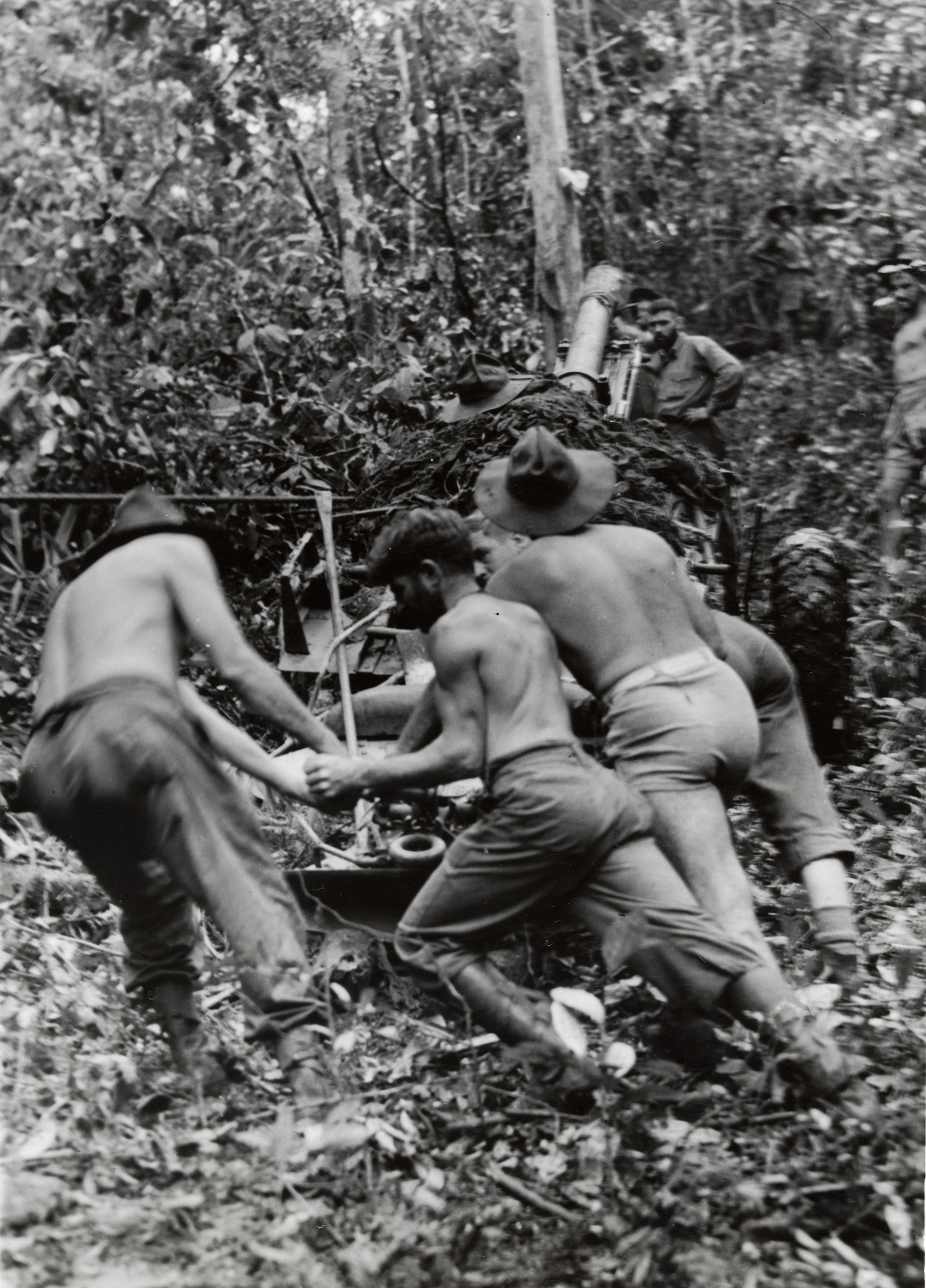 The Kokoda Track was a mud trail up and down steep hills through dense jungle bush.  For the most part, mechanized transport could not be used, so even heavy artillery such as this had to be hauled by the troops.

Soldiers on patrol in tall grass

This shows the 2/31st Australian Infantry Battalion along the Banks of the Brown River, making their way through the tall native cane.  Because of the flat terrain, the Brown River was the only 'easy' part of the Kokoda Track.

Men of the 2/31st Australian Infantry Battalion stop for a rest in the jungle between Nauro and Menari, Papua New Guinea, 1942 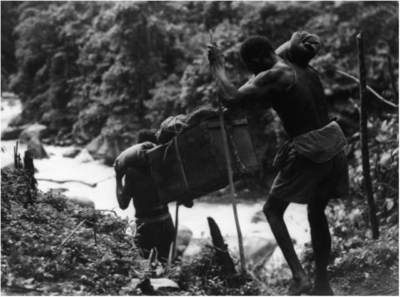