Year 8 History | Exploring the Spanish conquest of the Americas 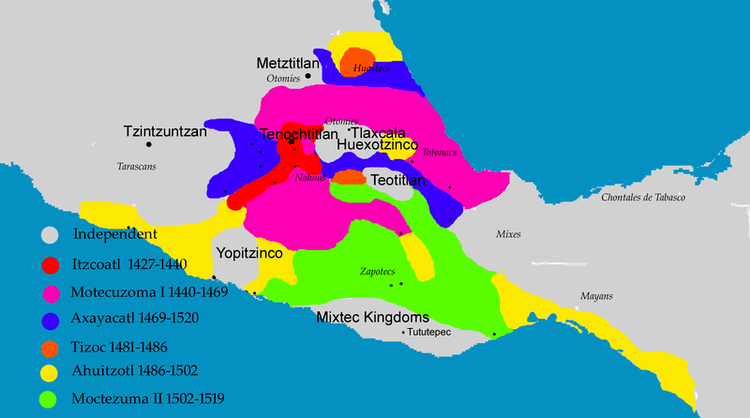 The Aztecs were an ancient Mesoamerican people, ruling over the Aztec empire in the 15th and early 16th centuries. The Aztecs created one of the greatest Mesoamerican civilisations, with complex social structures, impressive agricultural technology and a thriving culture. This empire lasted for nearly two centuries before the arrival of the Spanish conquistadors and the uprising of surrounding tribes. Read through the resources below to learn more about this fascinating empire and how it came to an end.

Find out about the Aztecs (DK Find Out, n.d.)

An interactive map of the Aztec Civilsation, with short pieces of information on many topics such as religion, food, art & craft, and more.

This article describes in detail the origin of the Aztec empire, their culture and their decline after the arrival of Hernan Cortes and the Spanish army.

The Aztec Empire (c. 1345-1521) covered at its greatest extent most of northern Mesoamerica. Aztec warriors were able to dominate their neighbouring states and permit rulers such as Montezuma to impose Aztec ideals and religion across Mexico. Highly accomplished in agriculture and trade, the last of the great Mesoamerican civilizations was also noted for its art and architecture. This detailed article provides the historical background, including religion, art, architecture, and the collapse of the Aztec civilisation.

The Maya Empire, centred in the tropical lowlands of what is now Guatemala, reached the peak of its power and influence around the sixth century A.D. The Maya excelled at agriculture, pottery, hieroglyph writing, calendar-making and mathematics, and left behind an astonishing amount of impressive architecture and symbolic artwork. Most of the great stone cities of the Maya were abandoned by A.D. 900, however, and since the 19th century scholars have debated what might have caused this dramatic decline. This article gives information about the rise of the Maya, their culture, and their mysterious decline.

The great Inca Empire of South America was dominated by the great mountain range of the snow-capped Andes. No other people built towns so high above sea level. By about 1200 A.D., the Incas had grown from a small tribe living in the Andes into an organised society united une oner ruler, called "the Inca". From his capital at Cusco, the Inca was worshipped as a child of the sun god. In 1438 A.D., the ruling Inca, Pachachuti Yupanqui, began a program of conquest. In less than a hundred years, the Incas had developed into a mighty empire. Find out more about this mighty empire with this interactive website, which includes maps, pictures and a quiz to test your knowledge.

The Americas: the continents of North and South America.

Aztec Empire: a tribe that stretched between the Pacific Ocean and the Gulf of Mexico, ruling nearly 500 city-states by 1519.

Calpulli: groups of families that controlled the use of the land and performed other territorial functions, as well as social ones.

Chinampa: a long and narrow floating field on a shallow lake bed, artificially built up by layering soil, sediment, and decaying vegetation and used, especially by the Aztecs, to grow crops.

Clans: a group of people united by actual or perceived kinship and descent.

Commoners: one of the ordinary or common people, as opposed to the aristocracy or to royalty.

Conquest: taking control of a people or place by military force.

Conquistadors: a conqueror, especially one of the Spanish conquerors of Mexico and Peru in the 16th century.

Emperor: a sovereign ruler of an empire.

Extended response: an open-ended question that begins with some type of prompt.

Flay: strip the skin off (a corpse or carcass); or whip or beat (someone) so harshly as to remove their skin.

Gods: a superhuman being or spirit worshipped as having power over nature or human fortunes; a deity.

Hernan Cortez: the Spanish conquistador who overthrew the Aztec empire (1519–21) and won Mexico for the crown of Spain.

Historical sources: an original source that contain important historical information. These sources are something that inform us about history at the most basic level, and these sources used as clues in order to study history.

Inca Empire: a tribe in South America who extended their territory along the western coast of South America, and become the most powerful in the Americas by 1493.

Long term: occurring over or involving a relatively long period of time.

Market: a physical place to buy food or other products, or for the smallholder, the local gathering where periodically, they sell their produce.

Mayan Empire: an empire centred in the tropical lowlands of what is now Guatemala, reached the peak of its power and influence around the sixth century A.D.

Montezuma: the ninth Aztec emperor of Mexico, famous for his dramatic confrontation with the Spanish conquistador Hernan Cortez.

Nobles: a social class normally ranked immediately below royalty and found in some societies that have a formal aristocracy.

Primary source: an immediate, first-hand account of a topic, from people who had a direct connection with it.

Short term: occurring over or involving a relatively short period of time.

Slaves: a person who is the legal property of another and is forced to obey them.

Status: status is the level of social value a person is considered to hold.

Tenochtitlan: the capital of the Aztec Empire.

Warrior: a person specialising in combat or warfare, especially within the context of a tribal or clan-based warrior culture society that recognises a separate warrior class.